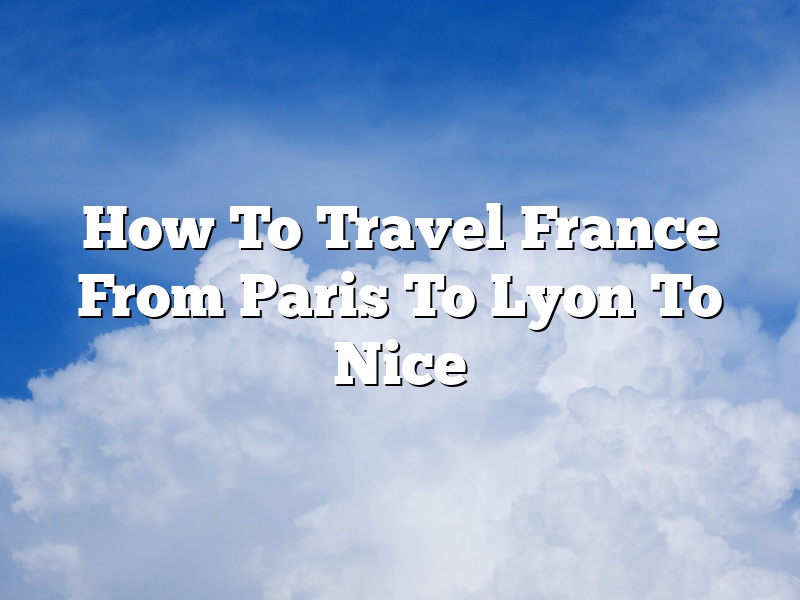 How To Travel France From Paris To Lyon To Nice

Paris, Lyon, and Nice are all popular tourist destinations in France. If you’re looking to visit all three in one trip, here’s a guide on how to travel between them.

There are several ways to travel between Paris and Lyon. You can take a bus, train, car, or plane. The fastest and most direct way to travel between the two cities is by train. The train ride takes about two and a half hours.

There are several train companies that operate between Paris and Lyon. SNCF is the largest train company in France and offers the most frequent and reliable service. Tickets can be purchased online, at a train station, or through a travel agent.

If you’re traveling between Paris and Nice, there are several options as well. You can take a bus, train, car, or plane. The fastest way to travel is by plane, which takes about one and a half hours. However, the plane ticket is the most expensive option.

The train is the cheapest and most convenient way to travel between Paris and Nice. The train ride takes about six and a half hours. Tickets can be purchased online, at a train station, or through a travel agent.

There are several bus companies that operate between Paris and Nice. However, the buses are often more expensive and take longer to reach their destination than the train.

If you’re driving between Paris and Nice, the drive will take about nine hours. The most direct route is the A6 motorway.

Whatever mode of transportation you choose, be sure to purchase a rail pass or France Rail Pass if you’re planning on doing some traveling within France. The pass allows you to travel anywhere in France on the rail network without having to purchase a separate ticket for each journey.

So, if you’re looking to explore more of France beyond Paris, Lyon, and Nice, the France Rail Pass is a great option.

Is there a direct train from Paris to Nice?

Yes, there is a direct train from Paris to Nice. The train leaves Paris Gare de Lyon station and arrives in Nice at Nice Ville station. The trip takes about six and a half hours.

Is it better to fly or take the train from Paris to Nice?

Is it better to fly or take the train from Paris to Nice?

There is no simple answer to this question as it depends on a number of factors, such as cost, time, and convenience.

flying is often the quickest option, but it can be more expensive than taking the train. The train from Paris to Nice takes around six hours, while the flight takes around one hour and fifteen minutes.

However, the train can be more inconvenient as it sometimes requires making a change in Lyon or Marseille. The flight, on the other hand, goes straight to Nice.

Ultimately, it is up to the individual to decide which option is best for them.

Yes, there is a high-speed train from Paris to Lyon. The train is called the TGV and it is a very popular way to travel between the two cities. The trip takes about two and a half hours, and there are several departures each day.

The TGV is a very comfortable way to travel. There is plenty of legroom and the seats recline. The train also has a café car, where you can buy food and drinks.

The TGV is a very reliable way to travel. It almost never delays or cancels its departures.

If you are travelling from Paris to Lyon, the TGV is definitely the way to go.

Is there a direct train from Nice to Lyon?

There is a direct train from Nice to Lyon, but it is not a high-speed train. The journey time is about three hours and thirty minutes.

This is a question that has been asked by many travelers over the years, and the answer is a resounding yes! Lyon is a beautiful city in southern France that is full of history, culture, and amazing food. There is something for everyone in Lyon, whether you are looking for a relaxing vacation or an adventure.

The city of Lyon was founded in 43 BC by the Roman general Julius Caesar, and it has been a major center of culture and commerce ever since. Over the years, Lyon has been home to many famous people, including the French poet Paul Verlaine and the composer Maurice Ravel. The city is also known for its food, with restaurants serving up everything from traditional Lyonnaise dishes to world-famous gastronomic fare.

There are plenty of things to see and do in Lyon. The city’s many museums include the Museum of Fine Arts, which features works by artists such as Rembrandt, Monet, and van Gogh, and the Museum of Resistance and Deportation, which tells the story of the French resistance during World War II. Lyon is also home to a number of beautiful churches, including the Basilica of Notre-Dame de Fourvière and the Saint Jean Cathedral.

One of the best things about Lyon is that it is a very walkable city. You can easily explore the many sights and sounds of Lyon on foot, and there are also a number of bike lanes throughout the city. If you want to explore further afield, the city is also well-connected by public transportation.

So is Lyon worth visiting? Absolutely! The city has something for everyone, from history buffs to foodies to outdoor enthusiasts. So what are you waiting for? Book your trip to Lyon today!

Well, that really depends on what you want to do while you’re there. If you’re just looking to relax on the beach and enjoy the Mediterranean climate, then a few days should be plenty. However, if you want to explore all that Nice has to offer, then I would recommend spending at least a week there.

Some of the things you can do in Nice include strolling along the Promenade des Anglais, visiting the old town quarter of Cimiez, checking out the Matisse Museum, and eating some of the city’s delicious food. There’s also plenty of opportunity for outdoor activities, such as hiking in the nearby mountains or cycling along the coast.

The answer to this question is a bit complicated. Lyon and Nice are about 400 kilometers apart, but they are not exactly close to each other. If you are looking for a city that is close to Nice, you might want to consider Marseille, which is about 200 kilometers away.