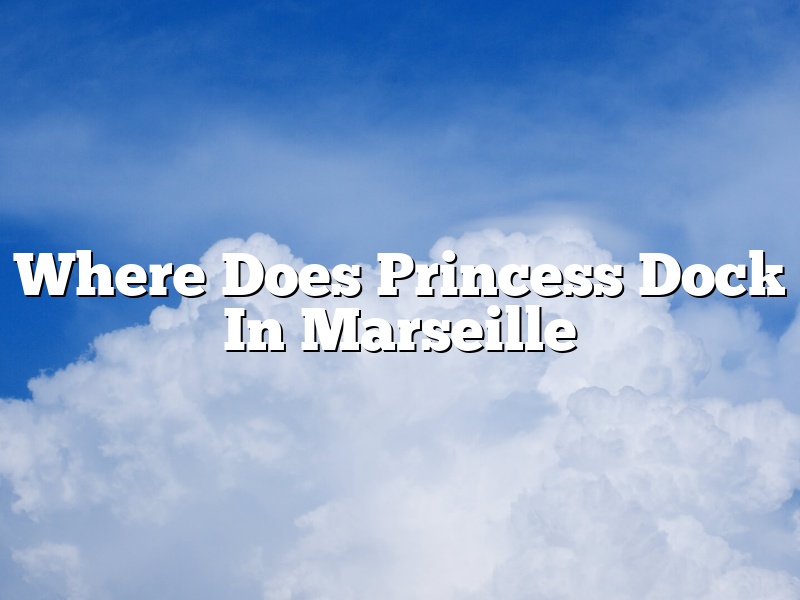 Where Does Princess Dock In Marseille

Princess Dock is a cruise ship dock located in the city of Marseille in southern France. The dock is situated on the north bank of the river Rhône, within the Euroméditerranée business district. The dock is used by cruise ships sailing the Mediterranean Sea.

The dock was built in 2003 as a replacement for the Vieux-Port cruise ship dock, which was closed in 2002. The dock is owned and operated by the Port of Marseille.

The following cruise ships are scheduled to dock at Princess Dock in Marseille in 2018:

Where do Princess Cruises dock in Marseille?

Princess Cruises dock in Marseille at the Vieux Port, the city’s main port. The port is in the heart of Marseille and offers stunning views of the cityscape and the Mediterranean Sea. There are a number of different cruise terminals in the Vieux Port, so be sure to check your ship’s arrival and departure terminal when making your travel arrangements.

There are a number of things to do in Marseille, whether you’re a cruise passenger or not. The Vieux Port is home to a number of restaurants, cafes, and shops, and is a great place to people watch. The city is also home to a number of historical attractions, including the Notre Dame de la Garde basilica and the Chateau d’If.

How far is the cruise port from Marseille?

Where is the port of Marseille?

The Port of Marseille is the largest port in France, and the third largest in the Mediterranean Sea. It is located in the city of Marseille, in the southern part of the country. The port is a major economic center for France, and it is also a transportation hub for the region. The port has a total of five terminals, and it handled nearly 33 million tons of cargo in 2015. The port is also a major tourist destination, with more than 8 million visitors each year.

Where do the cruise ships dock in South of France?

The South of France is a popular tourist destination, and many cruise ships dock in the region. There are several ports that cruise ships can dock in, including Marseille, Nice, and Toulon. Each port offers its own unique attractions and activities.

Marseille is the largest city in the South of France, and it is home to many historical attractions, including the Notre Dame de la Garde basilica and the Chateau d’If. The city is also home to a vibrant nightlife and culinary scene.

Nice is a popular beach town that is known for its charming Promenade des Anglais. The town is also home to several museums, including the Museum of Modern and Contemporary Art.

Toulon is a port city that is home to a naval base. The city is also home to several historical attractions, including the Cathedral of St. Marie Majeure and the Clock Tower.

Can you walk to Marseille from port?

Yes, you can walk to Marseille from the port. It’s a bit of a walk – about 18 miles – but it’s definitely doable. The route is mostly flat, and there are a few places where you can get a bit of a break from the sun. Plus, there are some great sights to see along the way.

Is there an old town in Marseille?

There is an old town in Marseille, and it is a beautiful place to visit. The old town is located in the heart of the city, and it is full of historic buildings and churches.

The old town is a great place to wander around and explore. There are lots of narrow streets and alleyways, and it is easy to get lost in the maze of buildings.

The old town is also home to some of Marseille’s most famous attractions, including the Cathedral de la Major and the Basilica Notre Dame de la Garde. These are both worth a visit, and they are both very impressive buildings.

The old town is a great place to spend a day or two, and it is well worth a visit if you are in Marseille.

How do I get from Marseille to the cruise terminal?

If you’re cruising out of Marseille, you’ll need to get from the city to the cruise terminal. Here’s how:

First, take a taxi or bus from the city to the Saint-Charles train station. From there, take the train to the terminal. The train ride will take about 20 minutes.

Another option is to take a taxi from the city to the terminal. The taxi ride will cost about €30-40.