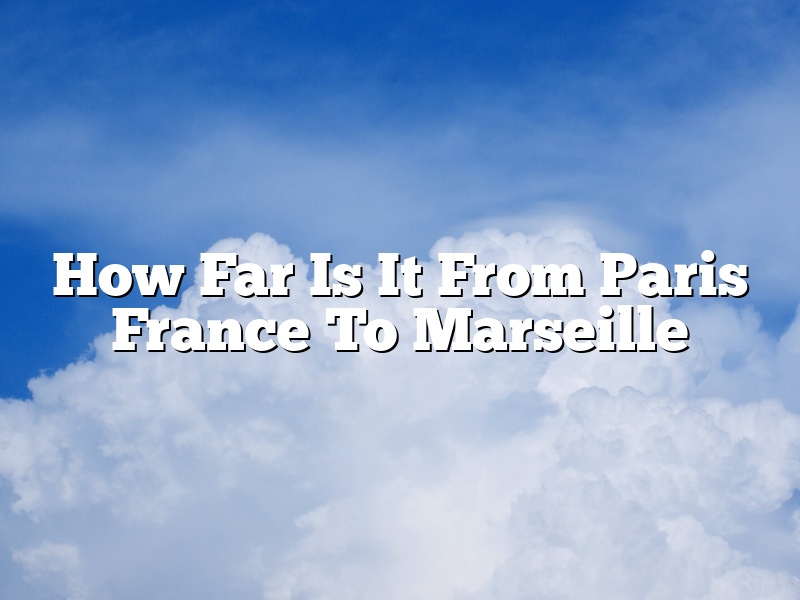 How Far Is It From Paris France To Marseille

Paris and Marseille are two of the most iconic cities in France. They are both located in the south of the country, but are quite far apart. How far is it from Paris to Marseille?

The distance between the two cities is about 470 kilometers, or 292 miles. It takes about six hours to drive from Paris to Marseille, depending on the route and traffic conditions.

Marseille is a port city, and is the second largest city in France. It is known for its beautiful beaches, Mediterranean climate, and diverse culture. Marseille is a popular tourist destination, and is a great place to visit if you are interested in French culture and history.

Paris is the capital of France, and is one of the most popular tourist destinations in the world. The city is known for its beautiful architecture, history, and culture. There is something for everyone in Paris, whether you are interested in art, food, history, or nightlife.

If you are planning a trip to France, be sure to add both Paris and Marseille to your itinerary. The cities are both worth a visit, and are each unique in their own way.

There is a high-speed train from Paris to Marseille that makes the journey in just over three hours. The train runs up to 300 kilometers per hour and makes several stops along the way. Tickets are available for purchase online or at the train station.

How do I get from Paris to Marseille?

There are a few ways to get from Paris to Marseille.

The first way is to take the high-speed TGV train. The journey takes about 3.5 hours, and there are departures every hour.

Another option is to take a plane. The flight time is about an hour, and there are several flights per day.

Finally, you can also take the bus. The bus trip takes about 8 hours, and there are several departures per day.

When it comes to figuring out how many days you should spend in Marseille, it really depends on what you want to get out of your visit. If you’re looking to explore the city and its attractions, then a few days should be enough. However, if you want to take day trips to some of the surrounding areas, then you’ll probably want to stay for a week or more.

Marseille is a great city to explore on foot. The main sights and attractions are all within walking distance of each other, so you can easily see everything in a few days. Some of the highlights include the Old Port, the Notre Dame de la Garde Basilica, and the Chateau d’If.

If you’re interested in learning more about the history and culture of Marseille, then I would recommend taking a guided tour. There are a few companies that offer walking tours of the city, and they’re a great way to learn more about the sights and attractions.

If you’re looking to take day trips from Marseille, there are plenty of options available. The most popular destinations are the nearby towns of Aix-en-Provence and Avignon, both of which are well worth a visit. Other great day trip options include the beaches of the Cote d’Azur, the city of Nice, and the medieval town of Gordes.

In summary, if you’re looking to explore the city of Marseille and its surrounding areas, then I would recommend staying for a week or more. If you’re only interested in exploring the city, then a few days should be enough.

The cheapest way to travel from Paris to Marseille is by train. A one-way ticket on the TGV costs €25. The trip takes about two and a half hours.

The most expensive way to travel from Paris to Marseille is by plane. A one-way ticket on Air France costs €60. The trip takes about an hour.

Marseille is a city in the south of France known for its Cote d’Azur coastline, its vibrant culture, and its seafood. The city is the capital of the Provence-Alpes-Côte d’Azur region and is the largest city in France after Paris.

Marseille is a popular tourist destination, with attractions including the Vieux-Port (the old port), the Basilique Notre-Dame de la Garde, and the Château d’If. The city is also known for its vibrant culture, with a strong Mediterranean and African influence. Marseille is home to a large number of museums, including the Musée d’Histoire de Marseille, the Musée des Beaux-Arts de Marseille, and the Centre Georges Pompidou-Méditerranée.

The city is also known for its seafood, with a large number of seafood restaurants located in the Vieux-Port and the adjacent neighbourhoods. Some of Marseille’s most popular seafood dishes include bouillabaisse, a fish stew made with various types of seafood, and Pastis, a type of anise-flavored liqueur.